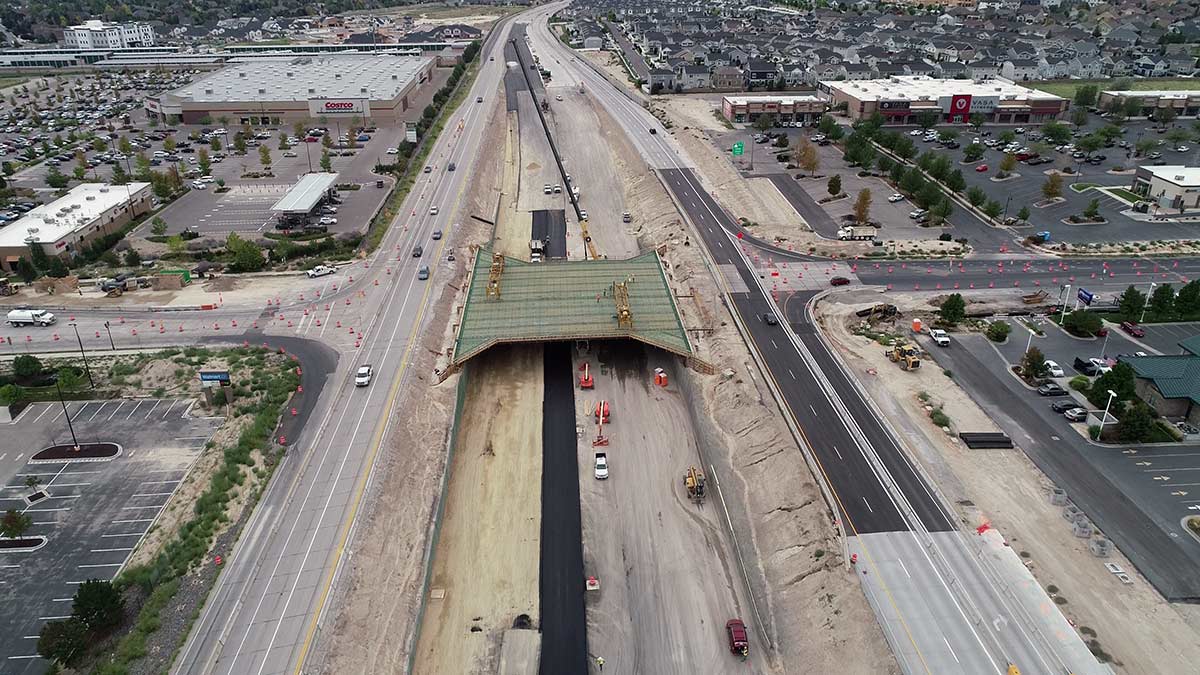 Garrett McMullin, Area Manager over alternative delivery, has been extensively involved with the project from its inception. He worked on the pursuit, proposal, and estimation portion, which began in mid- to late-2019. Construction commenced in 2020 before finishing up last month. Garrett was also heavily involved in the Bangerter Four Interchanges, which followed a similar timeline starting in 2016.

“The job as a whole, it’s complex work,” Garrett said. “It’s really as if we’re working on multiple projects at once. Between the two jobs I’ve worked on, there have been seven different interchanges. None of those interchanges touch one another, so we’re working at individual sites which can lead to some logistical concerns with equipment and materials.”

WW Clyde worked on the joint venture with Ralph L. Wadsworth Construction. The crews worked together to learn the nuances, processes, cultures, and personalities of everyone involved. Due to the nature of the work, the project ended up being very phase heavy because of shifting traffic patterns.

Garrett says the team is able to look back on the project with a lot of pride at what was created. The crew recognizes the difference that their efforts have made for the traveling public, reducing travel times and eliminating a majority of accidents due to adjusted conflict points.

Robert Peterson, Superintendent on the Bangerter Three Interchanges, has also been a key figure in the completion of the project. He’s seen several challenges inherent to the task but has worked hard to ensure everything was done to specifications.

“It’s a high paced and schedule driven line of work,” Robert said. “Unforeseen utilities are always a tough challenge. It can also be challenging getting the right guys that want to do this line of work on a busy highway. We’re working in the middle of a freeway, so ongoing traffic can be challenging to work through.”

Both Garrett and Robert have loved their time at WW Clyde, working on projects such as the Bangerter Interchanges. They hope that their work leaves a lasting legacy and acts as a monument to the contributions of everyone involved on the team.

“I have a lot of relationships built with the people here,” Robert said. “I also like how WW Clyde is structured. If you need a particular resource or equipment, it will be available to you. You can always have anything you need to get the job done, and I’ve always appreciated that.”

“There’s a satisfaction that comes from seeing your fingerprints spread throughout the valley and state of Utah,” Garrett said. “It’s satisfying to work with great people and be in a company where there can be real conversations about our approach to projects, making sure they’re aligned with the core values of the company. If there’s ever any question about whether we align with those values, or if there’s an issue from a safety perspective, there’s always a place to talk about that and feel well respected.”

Looking ahead, WW Clyde will propose on the next Bangerter Interchanges project this fall, with a likely start date of next spring 2023.