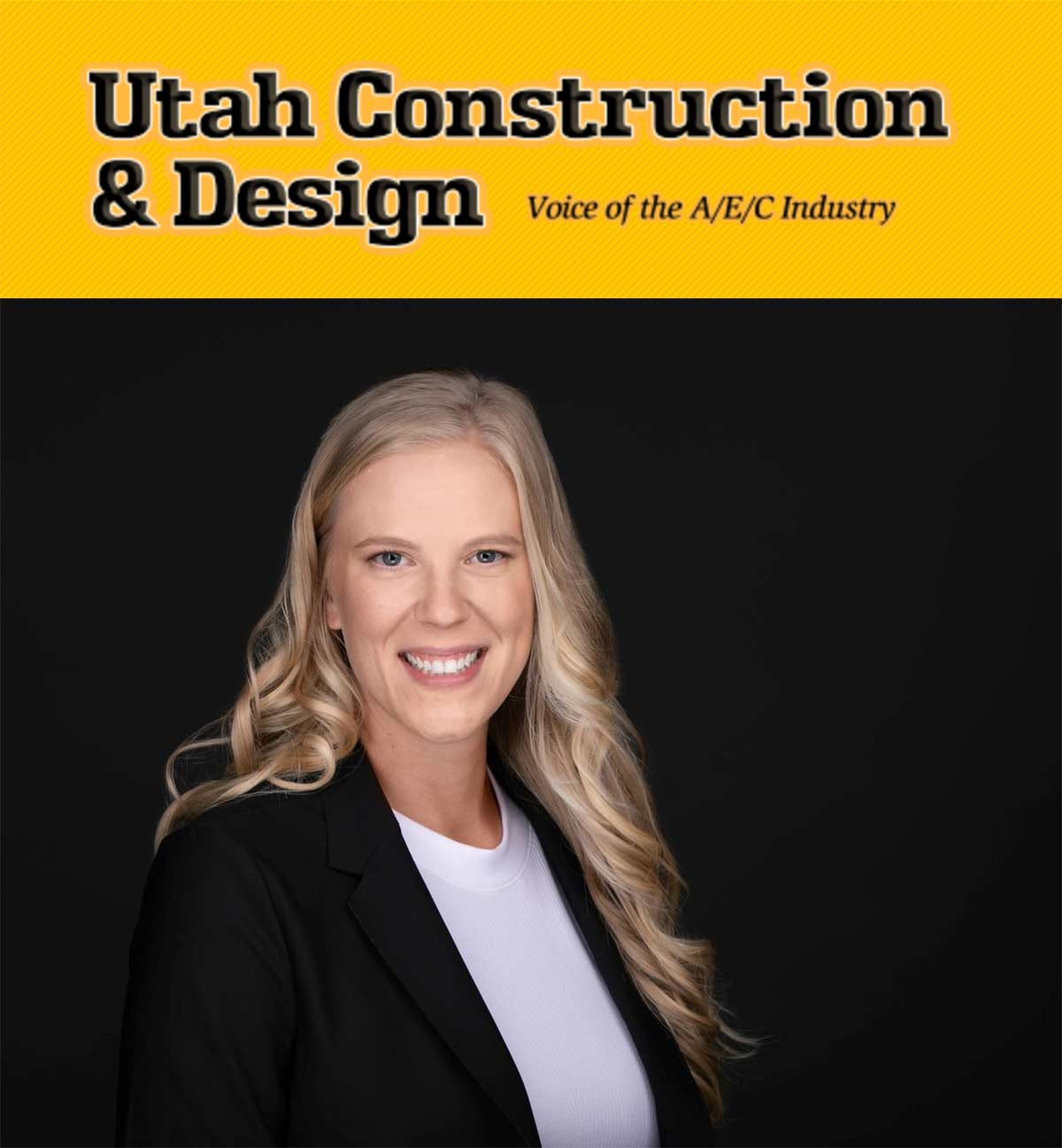 Utah Construction & Design (UC&D) Magazine named Morgen Baldwin as one of the top 40 under 40 years old.

Morgen Baldwin, Project Manager for WW Clyde, didn’t mince words when describing her ideal locale for her college internships at the University of Cincinnati, where she graduated in construction management.

“I only looked at places in Utah to intern,” she said. “It was Utah or nowhere else.”

It was skiing that drove her out West, and construction that made it possible. She came to work for CH2M Hill (now Jacobs Engineering Group) on the Lake Side II power plant in Lindon as an intern. There, working alongside WW Clyde helped convince her to join their team.

Her work with WW Clyde has since led her to iconic projects—like her first job, I-15 South Davis, Bangerter Four Interchanges,  and her current position on Bangerter Three Interchanges.

Her current duties include overseeing a specific scope of the project, the 10400 South Bridge, as well as working as Third Party Utility Manager. Within that role, her previous boss, the late Rex Dabling, advised her, “Don’t tell anyone you like utilities. People will think you’re doing them a favor.”

“I love the utility world,” she said with a laugh. “I have to know a little bit about everything: […] their drainage, their structure, their roadway and how everything is going to get built. […] I like that I get to be involved in everything.”

Field or office, Baldwin is involved—even if it took her a minute to get there.

She minimized herself during the early years, she said. Deferring to others and not speaking up belied who she was at heart. “I felt like I was a totally different person.” But things changed and a flip switched in her mind, something she credits to a boss at CH2M Hill, Lillie Alston—the first woman Baldwin met who worked in construction—who maintained herself in the pressure cooker of construction.

“She was very different than I expected her to be,” Baldwin said. “I learned so much from her. […] She opened my eyes to understanding that you can be who you are as a person and be successful […] and fit in the industry.”

When that switch flipped, “I felt like I didn’t need to fit some mold to fit in construction,” she said. Now she’s building relationships and managing design and construction with Michael Baker International, Rocky Mountain Power, Comcast, Ralph L. Wadsworth, and others.

She makes it sound so easy, and she credits the people she works with every day for making it seem so effortless—building massive roadways that tens of thousands of people travel on every day.

“The people who build [roadways] are so smart,” she said, describing their task as trying to piece together a million-piece puzzle where all the pieces are the same color—something that she feels like the general public may take for granted, especially as it comes to safety around construction zones.

Baldwin wants everyone to think of the safety of the road crews while driving. She told me to imagine that my office desk was next to a busy lane of traffic.

“If you speed in construction zones, that tells me everything I need to know about you,” she said.

And she’s serious. It’s a seriousness she has honed after spending nearly a decade in civil construction. Speak your mind; stand your ground—it’s easy to say, but Baldwin is doing it. The willingness to seize the day has put her on a trajectory to flourish. Now, she describes herself as a “lifer.”

“If I put a mirror up to myself, it would be Bangerter Highway,” she quipped.

So she likes horizontal construction?

“Oh yeah. […] It’s an exciting challenge, and it’s something we thrive off of,” she said of the breakneck pace of work and the fulfillment of building up Utah’s transportation network. “We’re proud of what we’ve done.”