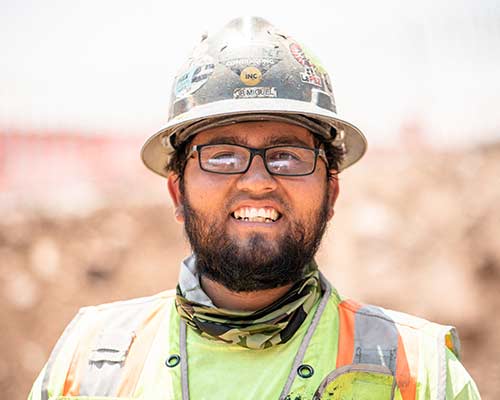 Growing up, Miguel Romero quickly learned that he didn’t like learning in a classroom setting. That’s why he jumped at the opportunity to perform hands-on work in a construction career.

“One of my friends used to work at Blount,” Miguel said. “They were needing people and asked if I wanted to come and work here. I decided to come.”

Miguel has seen his fair share of the industry — working in various positions throughout the company.

“When I first started here, I was a laborer in the utilities division also helping out with pipe work,” Miguel said. “Then, I was inside the trench, grading the transfer sewer lines and other wet utility work. After that, they asked if I wanted to move to the shoring division. I liked it a lot and started working my way up — originally as a laborer, and then, operating the horizontal drill rigs. From there, they asked me if I wanted to be a foreman. I worked on micropiling and vertical drilling before I became a superintendent, my current position for the last four years.”

In Miguel’s career he’s seen increased responsibility and management opportunities. Those changes haven’t always been the easiest to manage though.

“When I first started my job as a superintendent, I was stressed out so much that I wanted to quit,” Miguel said. “I talked to my team and let them know how I was feeling. They were very understanding and helped me see that it’s just another step, and that sometimes it’s normal to get a little frustrated going out of your comfort zone. That made me feel good to know that my team was with me. I wasn’t alone through the big change. That’s something that’s been a great memory for me.”

Now having been at Blount for nearly six years, Miguel hopes to continue moving up in the company.

“I like learning more and more and helping people along the way,” Miguel said. “I want to become a better boss by being a better person. I want to learn how to be better for them and our company. I want to create better opportunities for my team members to keep moving up as well.”

While working for Blount, the Southwest Division of WW Clyde, and its parent company, Clyde Companies, Miguel has seen firsthand the emphasis and value placed on its employees.

“I like that Clyde Companies takes really good care of their people,” Miguel said. “I’m talking about all of the important things like insurance and 401k contributions as well as everything else that they do for us. It’s a good company to work for. They treat us well, and the pay is good.

“I’m on the drilling side, and they know how to take care of us. Sometimes we don’t have a drilling job, but they don’t just let us sit at home without work. They’ll take care of us by sending us to another project to help out. That helps us too because we learn more than what we normally would on a daily basis.”

Learning as much as he can on the job has helped Miguel progress substantially in his career from where he started. He continues to learn more and more while passing along the most valuable lessons to he’s learned to his team.

“I always advise my team to work hard and to not be afraid of learning new things,” Miguel said. “It’ll take you far if you do that. Always be open minded and learn from people that have been doing this longer than you. Even though you might have some experience, there’s always something new that you can learn from somebody, no matter who it is. It could be anyone ranging from a laborer all the way up to the president of the company. Always be open minded and you’ll go far.”