OGDEN — A $117 million expansion of Interstate 15 from Farmington to North Salt Lake is expected to alleviate the traffic congestion that builds up during the weekday peak-hour commutes.

But with any project this large — the biggest project the Utah Department of Transportation has scheduled this construction season — motorists will experience temporary “side friction” slow-downs as a result of lanes having to be narrowed through the 11-mile corridor. 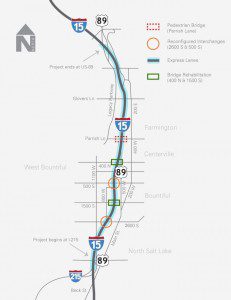 Beginning April 18, UDOT will begin renovating I-15 from Farmington to North Salt Lake, by adding express lanes in both directions, replacing seven old bridges, and reconfiguring two major interchanges, at 2600 South in Woods Cross and 500 South in Bountiful, according to Nathan Peterson, project manager for South Davis Improvements.

On Thursday, UDOT officials took their plans on the road in sharing official news of the project.

The seven bridges to be replaced will be the pairs at both the 2600 South and 500 South interchanges, at 1500 South, and a single bridge at 400 North.

Because of challenging geographical restraints — such as the south Davis oil refineries, Peterson said, the 2600 South interchange will consist of a hybrid design, taking in parts of both the CFI (continuous flow intersection) and DDI (divergent diamond intersection).

The 500 South interchange in Bountiful will consist of the DDI design, he said.

Peterson said a pedestrian overpass is also to be built at Parrish Lane in Centerville in connecting the commercial development on the west side of the city with the rest of the city.

The pedestrian bridge at Parrish Lane is “to provide that east-west connection for pedestrians,” Peterson said.

Upon the projects completion, with a completion date of July of 2015, the I-15 corridor will have “the longest continuous express lane in the U.S.,” Peterson said.

The entire length of the express lane will be about 75 miles, said Elizabeth Weight, UDOT communication strategist.

The remodel is also to provide new or expanded sidewalk along 1500 South, 2600 South, 500 South and 400 North, in creating more pedestrian and bike-friendly lanes, Weight said.

UDOT will be encouraging motorists to use the Legacy Parkway when possible, or use the FrontRunner commuter rail system.

To encourage motorists to use the public transit system, Peterson said, UDOT will be offering individuals a free 7-day rail pass.

For further information on the rail passes or project, visit www.udot.utah.gov/i15southdavis or contact the toll free hotline at 888-966-6624.

The contractor for the project is W.W. Clyde Construction, which has previously done work on the Legacy Parkway and other projects along I-15.